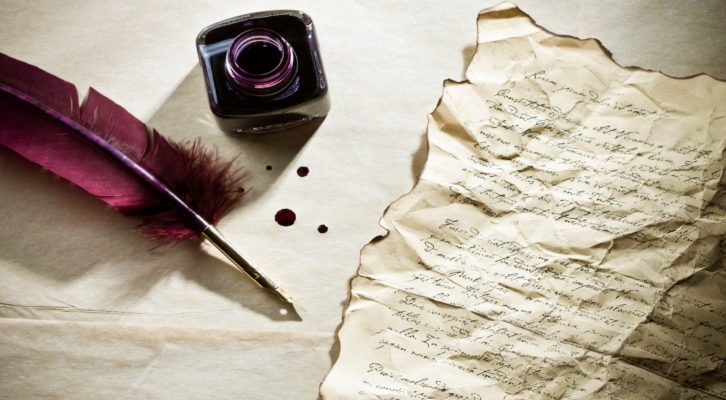 One day technology could make the pen obsolete, but it’s got a long way to go! Romantic? Perhaps, but as long as paper and fine leather journals are around, people will demand beautiful pens to write in them. But the pen has evolved a lot over the centuries, just like the journal has. Let’s take a look at three types of pens you can find on the market and what sets them apart.

The early Egyptians wrote on papyrus and scratched out their notes with dip pens. Dip pens are so named because you have to dip your pen into ink, write, then dip the pen again into the ink again when it runs out. Usually, a dip pen is made of a hollow feather quill with the tip whittled in a particular way. Sometimes they were made of reed, but quill pens are much sturdier. This was the only pen available for centuries. These days you can find metal dip pens that simulate the feather quill pen, but some people still prefer to carve their own!

Quill pens are excellent for calligraphy, as the flat edges of the nib allow the writer to make lines of different thicknesses. For writing enthusiasts, there are fonts (or ‘hands’) which are most easily made with quill pens. With these types of pens, you have more artistic freedom to beautify your writing.

Dip pens do have one major downside. You have to carry a separate inkwell and you have to keep dipping the pen. Dipping your pen and passing it over the page can make it drip onto the page, leaving blots. It takes skill to handle the pen correctly. Imagine carrying a pen that could leak at any time! And if a blot didn’t get caught and dried, it would lead to an ugly smudge.

Scribes demanded something better, and in 1809 the first pen with an ink reservoir was born. Fountain pens then came along in 1827 and grew in popularity through the 1850’s. As technology improved, a radical departure from the standard quill pen nib came to life. In 1888, the first patent for the ballpoint pen with liquid ink happened. People were experimenting like crazy with the technology.
The ballpoint pen dispensed a new fast-drying liquid ink onto the page. They could be carried in a pocket without leaking (if handled right). They made it very easy to jot something down. Because of these features, it remains one of the most commonly used types of pen today.
That doesn’t mean they don’t have their drawbacks. If the ink cartridge is damaged, all the ink can leak out everywhere. While the ink is fast-drying, it can still smudge if you’re not careful. Also, there are times when the ball falls out of alignment and splatters ink everywhere. That’s not a huge problem these days, but it was an early technical challenge!

Gel pens are still relatively new. They were invented in the 70’s by the Sakura Color Products Corporation in Osaka. They are quite similar to a ball point pen in delivery, but the ink they use is entirely different. Instead of a liquid ink, they use a gel ink.

Gel ink pens do have some advantages. If they do leak, they don’t tend to leak everywhere. They also dry much faster than liquid ink pen and don’t tend to show ink marks on the other side of the paper (bleeding). Another advantage is that they can write in any direction and on nearly any surface. However, they do have several disadvantages. They can smudge more than a liquid gel pen. They can skip. In fact, depending on how you hold your pen, the skipping of a gel pen may be unavoidable. The more vertical you can hold the pen, the better.

Dip pens are nostalgic and by virtue of the design of the pen allow you to create wonderful shapes. They are great for the handwritten leather journal because there is a level of skill in shaping the letters. You do have to carry your own inkwell, but for some people, that’s part of the appeal.
Liquid ink pens are more common these days, and they would be considered the standard. While you might have the problem with smudging, they are inexpensive and easy to replace. You can still enjoy the creation of designs for your journal.

Gel pens write a bit stiffer. They are easy to write with, but they cost a little more and are not extremely consistent with their writing. It’s definitely worth trying them out, as they come in a much greater variety of colors.

Your journal is yours. You don’t have to be stuck on a certain type of pen or ink while you’re writing. Take a spare journal and use it as a pen experiment! Take notes and you’ll have a great art journal and reference guide when you’re done. 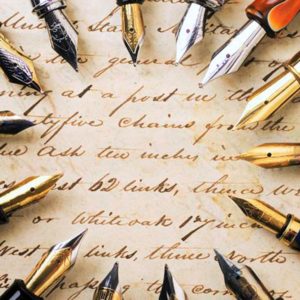 Creating your own Handwriting Style

One of the great ways to individualize your leather journal is to create your own hand. For those not familiar with calligraphy,...
Copyright 2019 Top 10 Leather Journals All rights Reserved.
Back to top